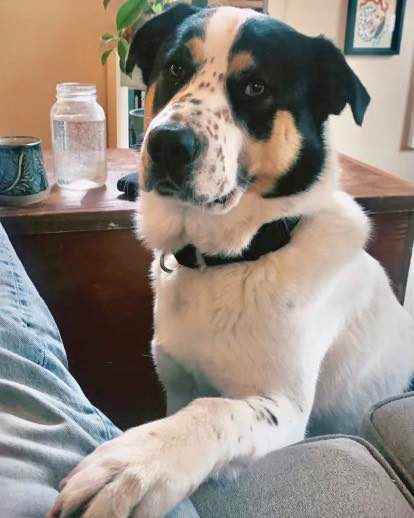 Meet Adoptable Charlie!
Charlie is a 2-3 year old, male, 80-85lb, white with black and tan trim, large, mixed breed.
Words from his foster family: Charlie is a total sweetheart and he’s always down to snuggle and be near to his humans (or any human for that matter). He absolutely loves people, strangers and friends alike. We think he would do best with someone who has a yard he can hang out in during the day or with someone who has the ability to take him outside lots, he really REALLY loves being outside.
He does have a habit of chewing things he’s not supposed to if he gets bored, hasn’t shown too much interest in toys yet but we are hoping we can figure out what he likes soon.
He’s been friendly with other nice dogs, but gets very excited and due to his size, and that does end up startling other people and animals at times. He’s just a big boy. His prey drive is quite high, especially for cats and deer at this time. He’s getting much better on his leash but definitely still needs training and patience as he still pulls quite a bit when he gets excited or finds a scent he really likes. Charlie is very quiet dog unless he gets worked up while playing(his bark is very funny for his size), but we haven’t had any noise complaints from our shared wall neighbours since we’ve had him.
If you’re interested in fostering to adopt Charlie please apply at raincoastdogrescue.com