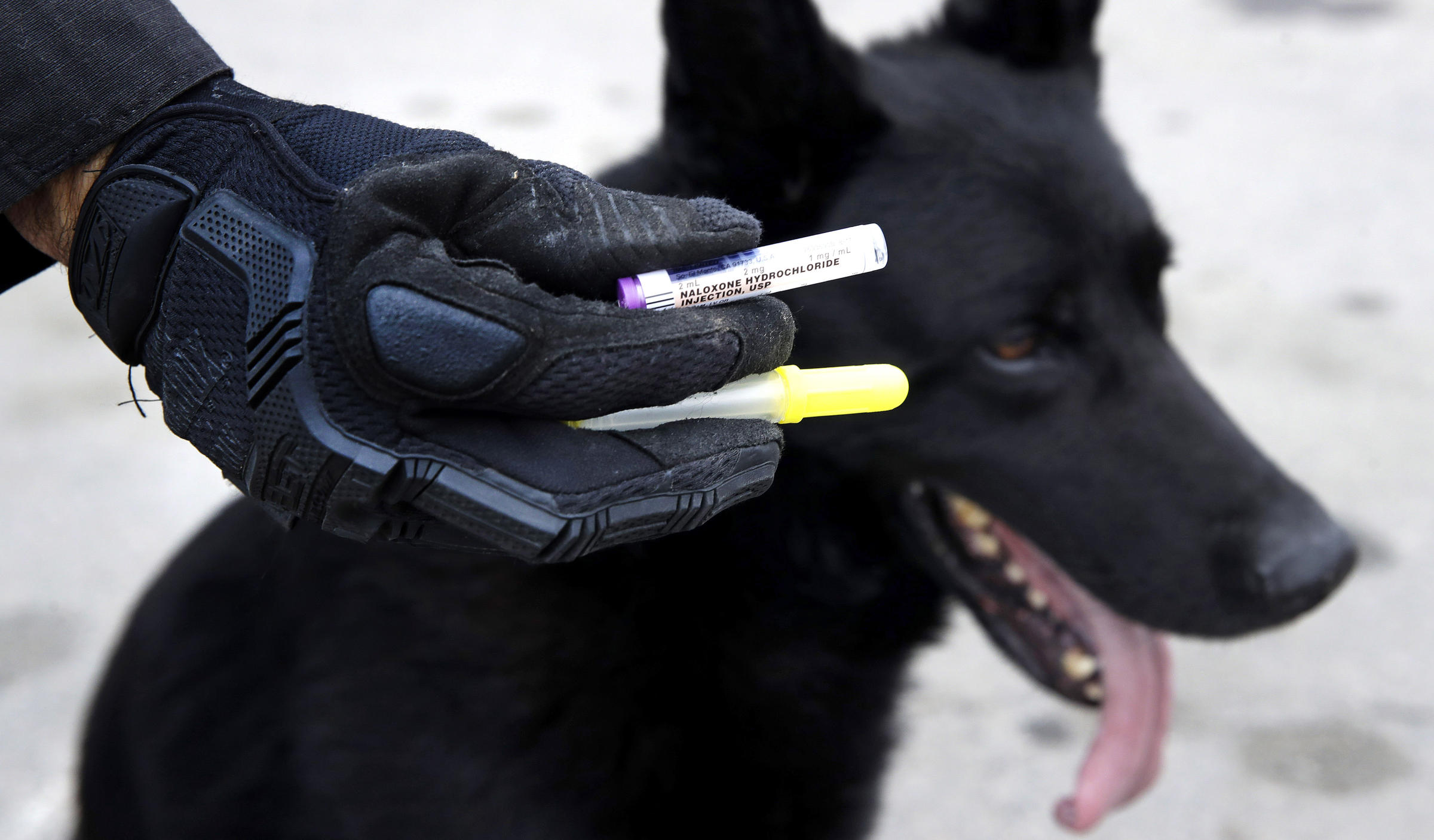 In this May 30, 2017, photo, Massachusetts State Police Trooper Brian Cooper displays a dosage of Naloxone during a training session with his K-9 Drako in Revere, Mass. During drug raids, police dogs literally follow their noses to sniff out narcotics, but now the powerful synthetic opioid fentanyl could be deadly to the K-9s. Police have a new strategy for protecting their four-legged partners, by carrying Naloxone for their dog, the same drug to reverse heroin overdoses in humans. (AP Photo/Charles Krupa)

Given the current opioid crisis, it is important to be aware of the impact
that this may have on our pets. Some examples of opioids include: Methadone,
Morphine, Fentanyl, Heroin, Dilaudid and Vicodin. As a long-time street nurse
in the Downtown Eastside of Vancouver, I have firsthand experience
intervening in dog overdoses. An opioid overdose in a dog can be caused
by the ingestion of a pure substance but can also occur from something as
small as licking drug paraphernalia. We encourage you to keep an eye out
when you are walking your dog for potentially harmfulsubstances.

Some things you may want to look out for on a walk or in the park include:
❖ Small baggies containing pills or powdered substances
❖ Syringes
❖ Cookers (small round trays used for cooking drugs)
❖ Small squares of a paper-like substance

When your pet accidentally ingests opioids, it can result in rapid
and severe poisoning, with symptoms often beginning with 15 minutes
of ingestion. It is important to be able to recognize the signs
which may include:

If you suspect your dog is having an overdose, you should seek
medical attention immediately. If you have access to Naloxone (Narcan),
an opioid antagonist, this should be administered immediately to help
reverse the effects of the opioid.

How to administer Naloxone (Narcan) to a dog:

⮚ For reference: take-home Narcan kits contain 3 x 0.4mg/ml ampoules of Narcan
⮚ Identify an injection area in the dog’s outer, rear thigh or behind the shoulder blades
⮚ Administer Narcan at a dose of 0.04 mg/kg. For example, a 22kg dog (50 lbs) would
require a dose of 0.9mg (approximately 2 ampoules)
⮚ Administer Narcan every 2-5 minutes until the dog begins to breathe at a normal rate
again

It is important to remember that Narcan lasts for a much shorter length
of time than opioids, meaning that it can wear off and your dog
can overdose again, even if it does not ingest another harmful substance.
For this reason, you should always seek medical attention for your dog
after administering Narcan, and monitor them for several hours after
to ensure they make a full recovery.

How to give Narcan® to a K9